Landscaping – a Key Element to Improve Our Environment 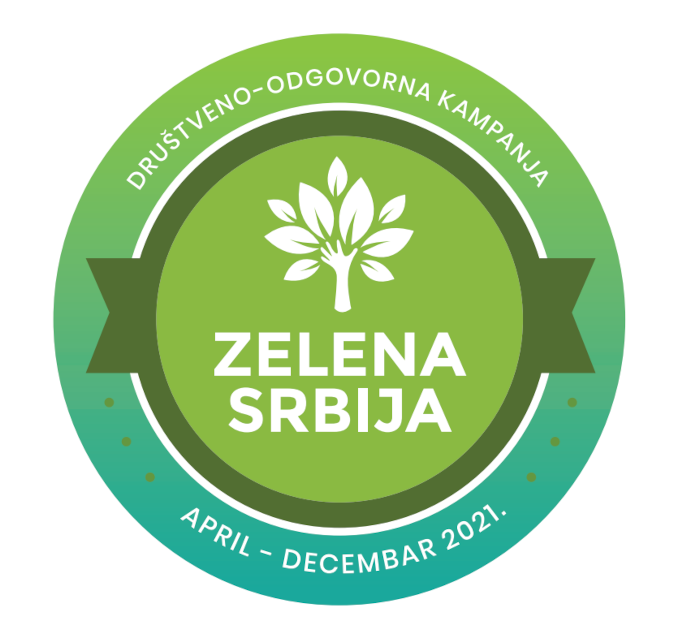 In order to raise the citizens’ awareness on the importance of the environmental protection and its preservation for the future generations, Serbian Radiation and Nuclear Safety and Security Directorate (SRBATOM) has set up the project of “Zelena Srbija” in 10 cities across Serbia. The project is carried out with the support of the Provincial Secretariat for Urban Planning and Environmental Protection, a number of Embassies to Serbia, and Color Media Communication. So far in 2021, the project has been realized in Zrenjanin, Backa Palanka, Priboj, Topola and Kikinda, while at least five more cities are yet to come.

SRBATOM’s Director, Mr Sladjan Velinov stated in his speech among other things that we did not inherit our planet from our ancestors, but borrowed it from our descendants, and thus bear the responsibility to protect it and preserve for future generations.

“SRBATOM’s activities aiming at the environmental protection are manifold. These include environmental monitoring activities, the system of early warning of a nuclear or radiological accident, as well as the establishment of the system of licensing, control and inspection oversight serving to prevent any radioactive material from contaminating and thus harming the environment. In addition, through the project of “Zelena Srbija”, SRBATOM aims at enhancing the quality of our environment and at impacting people’s health by landscaping, which, besides foresting and reforestation is a key to better surrounding”.

Velinov expressed his satisfaction at the fact that in such a noble cause of protecting the environment and raising the awareness on the importance of its preservation, SRBATOM is not alone, but enjoys the support of the Provincial Government and a number of local self-governments and embassies in Serbia.

Backa Palanka was the second municipality to recognize the significance of the project and provided for pine and linden seedlings to be planted within Partizan Block.

On the occasion, the president of the municipality of Backa Palanka, Mr Branisalv Susnica stated that 25 million dinars had been allocated this year to the Fund of Environmental Protection, which enabled the municipality, in cooperation with Vojvodinasume, both this year and the previous ones, to give out free seedlings to their citizens and institutions such as schools and kindergartens.

“I hope this is just the beginning of our cooperation which will be further intensified in the future, primarily thanks to the project organizers and partners”, added Susnica.

The Ambassador of Israel to Serbia, H.E. Yahel Vilan expressed his appreciation to be present in Backa Palanka and to be a part of the mission of making Serbia greener, as well as that reforestation is regarded as one of the highest achievements in the state of Israel. “Since 1900, there has been more than 250 million trees planted in Israel, which contributed to Israel being the only country that had more trees at the end of the 20th century, than it had at its beginning”, added Vilan.

The Ambassador of Denmark to Serbia, H.E. Susanne Shine expressed hope that today’s event and similar ones would serve as inspiration to progress towards two important and related goals – transmission to the use of green energy, and preservation of forests and biodiversity.

Following Zrenjanin and Backa Palanka, the project activities moved to the municipality of Priboj where spruce trees were planted within the school center in Novi Priboj.

“We have selected the area with primary and secondary schools in Priboj because its will serve as reminder to younger generations on how important is to preserve our environment”, said Boris Mrdovic, the president of the municipality of Priboj.

The Ambassador of the Islamic Republic of Pakistan to Serbia, H.E. Shehryar Akbar Khan spoke on one of the biggest tree planting projects worldwide which is currently being carried out in Pakistan and bears the symbolic name of “Ten Billion Tree Tsunami ”.

“The project was launched by the Pakistan’s Prime Minister Imran Khan in 2018 with the aim of planting 10 billion trees throughout Pakistan by 2023. This is the reason why I was delighted to participate in today’s action – if I am not able to plant a tree in Pakistan, at least I can do it here in Serbia, which I now deem as my second home”.

The municipality of Topola was the fourth out of ten cities intended this year that recognized the importance of the project, and provided for several trees to be planted within the Community Health Center of “Sveti Djordje”.

The President of the municipality of Topola, Igor Petrovic expressed his great satisfaction that Topola was selected as one of ten municipalities where the project of “Zelena Srbija” will be carried out this year.

“Our participation in this project is a crucial element of fulfilling the vision we have for Topola. Our municipality, together with the Public Utility Company of Topola launched a number of activities aiming at making our city greener. We have given out free tree seedlings to schools in our municipality to mark Children’s Week, more than 100 seedlings of  white ash as a part of the action of “Plant Your Own Shade”, and taken part in today’s action in the organization of SRBATOM and the Embassies of Brazil and Cyprus”, said Petrovic.

The Ambassador of Brazil to Serbia, H.E. Eduardo Botelho Barbosa , emphasized his pleasure to be a part of this project which he finds to be very close to his country as Brazil is known as one of 18 countries with the largest biodiversity in the world.

The Ambassador of Cyprus to Serbia, H.E. Demetrios A. Theophylactou stressed his strong personal interest in the environmental protection since he believes that each of us is personally responsible for sustainability and even rehabilitating those segments of the environment that have been destroyed.

“Cyprus is currently reviewing its national strategy of community waste  management and waste reduction programme in order to determine the future needs for planning, as well as measures and actions to be implemented to fulfil the ambitious EU Circular economy action plan”, said the ambassador of Cyprus.

Kikinda was the fifth city where the project was carried out and where several trees were planted in the new block of flats in Pere Segendica Street.

The mayor of Kikinda, Nikola Lukac, expressed his satisfaction at the fact that Kikinda was a part of this project.

“The city of Kikinda and our self-government are fully and steadily devoted to the issue of the environmental protection. North Banat is the least forested part of Serbia and Europe, which makes us additionally responsible for correcting this and leaving healthier community to the future generations. This is why each tree we plant is as precious as gold to us”, said Lukac.

“The aim of the projects such as “Zelena Srbija” is to raise the awareness of the citizens of the importance of the environmental protection. So far, the Secretariat has participated in numerous activities, such as ‘Ocistimo Vojvodinu’, ‘Za Zeleniju Vojvodinu’, and this actions as well, which goes beyond Vojvodina and covers the entire Serbia. This is what the role of the Secretariat actually entails – to work jointly with the Ministry of Environmental Protection to organize strategically and observe all the activities aiming at protecting of the environment, raising the awareness of our citizens, and establishing the system of the environmental protection in general”, added the Assistant to the Provincial Secretary for Urban Planning and Environmental Protection, Nemanja Erceg.

The Deputy Head of Mission of the Embassy of Portugal, João Melo Alvim, reflected on numerous similarities between Portugal and Serbia.

“Despite the differences in the population, Serbia and Portugal are mid-size countries with numerous similar regions and almost identical distribution of population within the countries. Even when driving on highways, there are many regions I find quite similar to the ones in Portugal” said Melo Alvim.

“Vojvodinasume” will always be a partner in such activities, and we are ready to donate any seedlings to local self-governments, schools, kindergartens, etc., to contribute to landscaping and reforesting of our country”.

By planting trees, Serbian Radiation and Nuclear Safety and Security Directorate, as a socially responsible institution, wants to contribute to the environmental protection, raise it at higher level and support the preservation of our planet for future generations.