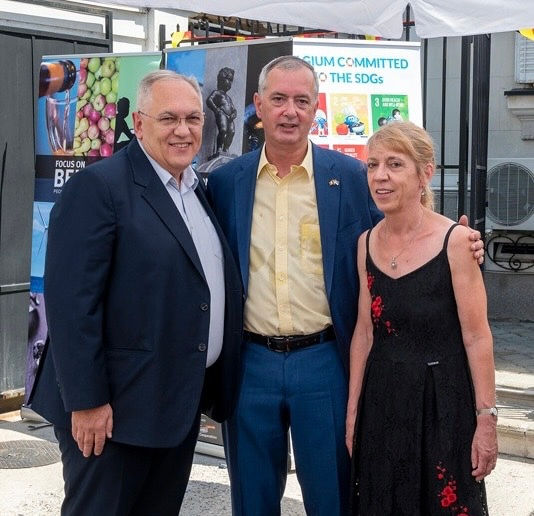 The Belgian Ambassador to Serbia, H.E. Koenraad Adam, organized the reception on 21 June in the embassy residence, marking the National Day of Belgium. The reception was attended by the Director of Serbian Radiation and Nuclear Safety and Security Directorate, Mr Sladjan Velinov.

The attendees at the celebration at the embassy in Belgrade were a great number of distinguished guests representing the public and cultural life in Serbia, as well as the representatives of the diplomatic corps. The main theme of the reception were famous Belgian comic books, and the guests had the opportunity to get to know this European country better through its animated characters.

Belgium celebrates 21 July as their national holiday to commemorate 21 July 1831 considered as the day of the formation of the independent Belgian state. This was the day when Leopold Saxe-Coburg swore his allegiance to the new Belgian Constitution and was proclaimed the King of Belgians, Leopold I. Every year on this day, the Belgian royal family, the official state institutions, and the representatives of the European Union, the seat of which is the capital of Belgium, attend the festivities which include the military and civic parades, playing of the national anthem and the fireworks in the end.

Serbian Radiation and Nuclear Safety and Security Directorate (SRBATOM) has realized its successful cooperation with the Embassy of Belgium in the past year. The Belgian Ambassador participated in the project of “Zelena Srbija”, which has been realized in different municipalities throughout Serbia for past three years,  in the municipality of Cajetina. Cajetina, as a good example of the landscape of Zlatibor, dominated by pine forests, was a perfect place to plant evergreen plants, mostly spruce trees indigenous to this mountain region.

H.E. Koenraad Adam, together with the representatives of the Directorate, also visited the Vinca Institute of Nuclear Sciences and, thus, had the opportunity to be introduced to the projects currently carried out at the Institute in cooperation with the Belgian institutions. This was organized also with the aim of opening up additional opportunities for furthering and expanding this cooperation in the future.