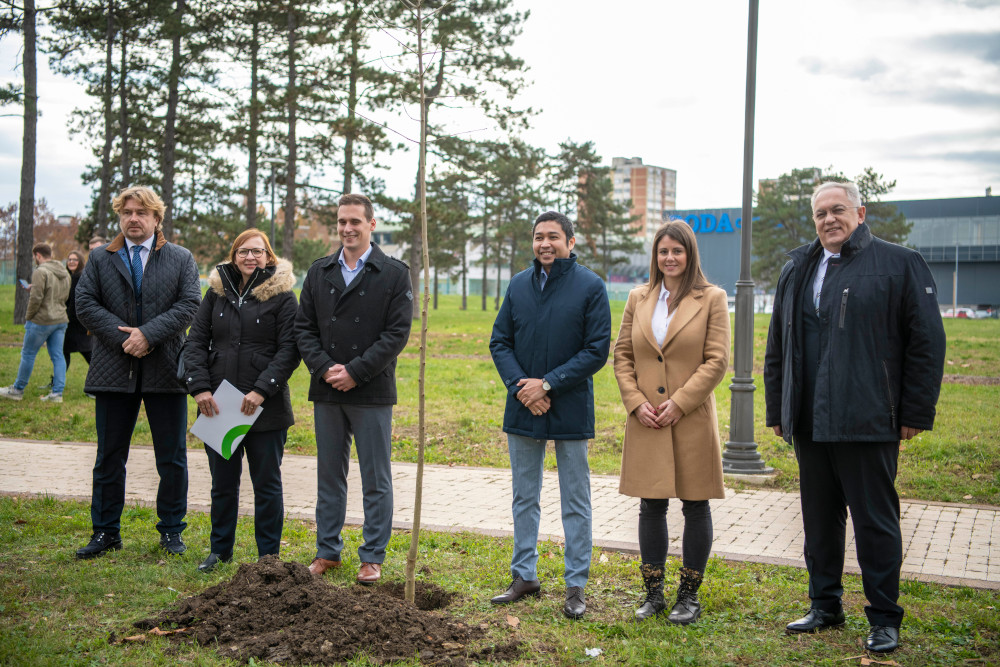 Serbian Radiation and Nuclear Safety and Security Directorate (SRBATOM), with the support of the Provincial Secretariat for Urban Planning and Environmental Protection, continued the realization of “Zelena Srbija” project in Pozarevac on 17 November and then in Kragujevac on Friday 19 November.

The seedlings of maple tree, considered as one of the greatest air purifiers, were planted in the ethno park of “Tulba” in Pozarevac.

On the occasion, SRBATOM Assistant Director, Mr Branko Brajic stated that for the past few decades, we had witnessed numerous changes that resulted in disturbances in our environment, and that forestation and landscaping proved to be the most efficient response to such changes.

“Trees have unmeasurable contribution to the quality of people’s lives and the survival of our planet. Each newly planted tree is a valuable natural resource and generator of oxygen. We truly believe that these new maple seedlings will contribute to the healthier and more beautiful environment in the city of Pozarevac”, said Mr Brajic.

The President of the City Assembly of Pozarevac, Mr Predrag Mijatovic said that the industry, buildings, vehicles, parking places and concrete surfaces are welcome in Pozarevac, but these cannot have a priority over gardens, parks, green surfaces, flowers and trees, and, as of today, maple seedlings.

“Zelena Srbija” was continued in Kragujevac when white ash seedlings were planted near Bubanj Lake.

SRBATOM Director, Mr Sladjan Velinov used this opportunity to emphasise that, by establishing connections between state institutions, local self-governments and good practise in other states, through a number of ecological activities, SRBATOM sets an example that each person can do something – plant a new tree, plant or otherwise enrich the existing parks and green surfaces.

“Our goal is not only to renew eco-fund in our country, but also to preserve the planet for future generations”, added Velinov.

Assistant Mayor of the City of Kragujevac, Mr Stefan Jovanovic expressed his gratitude on including Kragujevac in the map of places where the project would be realized.

“Care for our environment is important as this greatly affects the health and quality of people’s lives. I hope that this action will help raise the awareness of our citizens on how important is to protect the environment”, said Jovanovic.

Head of Mission of Malaysia, Mr Khairul Tazril Tarmizi expressed his satisfaction with being a part of this socially responsible project in Serbia.

“In times when the entire world moves towards technological and industrial development in general, preservation of the environment remains to be extremely important issue, both for us, and for the future generations. This is why we decided to support “Zelena Srbija” project and we are nothing but glad to be here today.

The aim of the project of “Zelena Srbija” is to improve the environmental protection and raise the awareness of the citizens, local self-governments and companies on the importance of landscaping and forestation in our country. The project foresees similar actions to be organized in ten cities and municipalities in Serbia, and the city of Kragujevac has been the eighth city so far.

Earlier in November, the project was realized in Sremski Karlovci where new linden trees were planted with the support of British Ambassador to Serbia. You can read more information on the following link