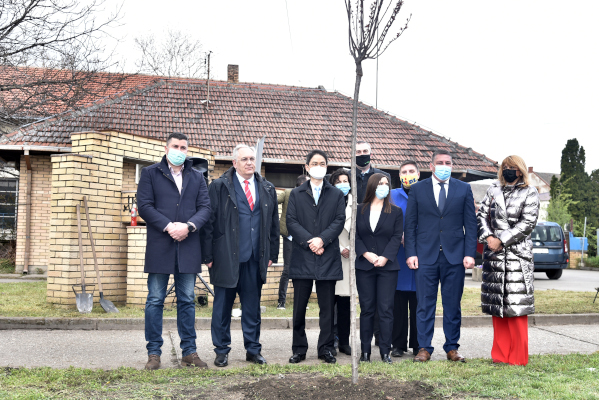 Serbian Radiation and Nuclear Safety and Security Directorate (SRBATOM), with the support of the Provincial Secretariat for Urban Planning and Environmental Protection and Color Media Communications is carrying out the project of Zelena Srbija in 2021.

Zrenjanin was the first city this year out of ten planned cities and municipalities that recognized the importance of this project and made arrangements for some 40 cherry-plum seedlings to be planted in Vojvode Petra Bojovica Street.

On the occasion, SRBATOM director, Mr. Sladjan Velinov, stated that SRBATOM, as a socially responsible institution, by participating in this activity aims to raise the citizens’ awareness on the importance of reforestation and landscaping of Serbia, rebuilding its eco-funds, and contributing to the preservation of our planet for future generations, but also to set an example to the others to do the same.

“The project was devised as a possibility of making connections between the state institutions and local self-governments on one end, and the best practises from other friendly countries on the other. By embarking on a number of activities, including the planting of a symbolic number of seedlings in Serbian cities, in a positive manner, we are showing that we are all interested in the surrounding nature and  wildlife, and that we want and can do something ourselves – to plant a new plant or a tree, or simply redecorate already existing parks and green areas“, stressed Velinov.

Also, on this occasion, SRBATOM director, Mr Velinov, also invited the representatives of the diplomatic corps, namely, H.E. Ruth Stewart, the Australian Ambassador to Serbia and H.E. Choe Hyoung Chan , the South Korean Ambassador to Serbia, to visit the Directorate, which they were pleased to accept.

H.E. Ruth Stewart, who had visited Zrenjanin for the first time, said that she was positively surprised by the warm welcome and expressed her satisfaction at taking part in such an action.

“Vojvodina and Australia are much alike – flatlands without many forests where every new tree contributes a lot to the improvement of the environment. Without a joint global initiative, it will be almost impossible to stop the climate changes”, said Stewart.

H.E. Choe Hyoung Chan, holds the opinion that the environmental protection is even more important than the economic development.

“South Korea is a mountainous country whose forests were almost completely destroyed during the Japanese occupation and the Korean War. This is why we attach great importance to reforestation and landscaping in our country, even greater than in case of economy. Without forests, we are facing the risk of large-scale natural disasters, which is why we were delighted to give our support to the actions such as the one today”, said the Ambassador Choe Hyoung Chan.

“The city of Zrenjanin has already done a lot on reforestation and landscaping. This is only one of many actions that we are carrying out. We are giving our best to plant as many trees as possible, by organizing different actions and projects. We have already allocated resources to redecorate one of the city parks. Anyone of us can give their own contribution, and every new tree is precious”, pointed out the deputy mayor of Zrenjanin, Mr Sasa Santovac.

The assistant to the Provincial Secretary for Urban Planning and Environmental Protection, Mr Nemanja Erceg stated that it was not by chance that the project of Zelena Srbija started in Zrenjanin considering the fact that the city is situated in mid Banat district as one of the least forested areas in our country.

The project of Zelena Srbija was successfully carried out in 2020 in Apatin, Sombor, Cacak, Sabac, Beocin, Vranje, Novi Becej, Bac and Zajecar.

The partners of this year’s project of Zelena Srbija are the Public Company Vojvodinasume, OTP Bank of Serbia, Lidl and Telenor.