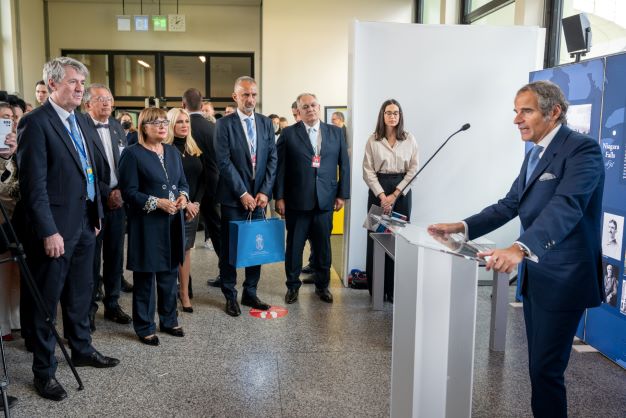 The exhibition on the life and work of one of the greatest Serbian scientists Nikola Tesla, will be organized in the exhibition area in the International Atomic Energy Agency (IAEA) headquarters throughout all five days of the General Conference. The exhibition was set up by the Museum of Nikola Tesla in Belgrade, as one of the most important institutions for preserving Serbian scientific and cultural heritage, and the Ministry of Culture and Information of the Republic of Serbia.

By evoking the memory of the inventions Tesla indebted mankind and made our world a better place to live, Maja Gojkovic, the Minister of Culture and Information, formally opened the exhibition.

“His life is a prime example that in order to deserve glory and eternal recognition, in addition to ingeniousness and talent, one needs to show the utmost determination and diligence. This exhibition shows the inception of the ideas that have changed the world. In this regard, I would like to point out that our great scientist was also a pioneer in radio communication. He published numerous papers in physics, and his inventions include as many as a thousand of inventions and patents. His extraordinary personality is still inexhaustible source of inspiration to numerous artists and authors worldwide, and some of the most famous global brands bear his name”, said the Minister.

The main theme of this year’s conference is green energy, environmental awareness and sustainability, and Nikola Tesla’s perseverance regarding the need to save the energy and preserve the environment more than a century ago, made him one of the pioneers of ecological frame of mind.

The Minister, Maja Gojkovic also reflected on the current circumstances worldwide and pointed at how this Serbian scientist proved to be a great visionary and innovator in this regard as well.

“The Ministry of Culture and Information is the patron of this exhibition, primarily to show our mutual obligation on the state, societal and individual level to continue to nurture and preserve the memory of the personality and the achievements of such a great figure. His heritage belongs to the entire world and mankind,” concluded the Minister.

The attendees at the exhibition were addressed by the IAEA Director General, Rafael Mariano Grossi, who expressed his pleasure and satisfaction at being present at the opening ceremony. He remembered his first acquainting with Tesla’s name in high-school in Buenos Aires, and his later acknowledgement of Tesla’s arrival to the USA, start of his career and genuine realization of his great inventions and achievements.

On this occasion, Grossi pointed at the long history of the partnership between the IAEA and the Republic of Serbia which has contributed a lot in the previous period, and finally expressed his hopes on its continuation in the future.

“This is why I believe that honouring Nikola Tesla is an excellent way of viewing Serbia, now and in future, in the same light, especially in the field of nuclear energy applications, including its generation, use in medicine, water management, food safety, as well as many other fields, some of which we can see here in this exhibition,” said Grossi.

He also expressed his gratitude on the opportunity to state his opinion and impressions on Tesla in such a “great and inspirational event”, and also expressed hopes to soon visit Belgrade.

The visitors will be able to see two most famous Tesla’s induction motors and the model of Adams Power Plant in Niagara Falls, while the story at the exhibition displays chronologically and spatially follows Tesla’s great idea of reverse magnetic field and the invention of induction motor as the key link in the generation and the use of alternating current.