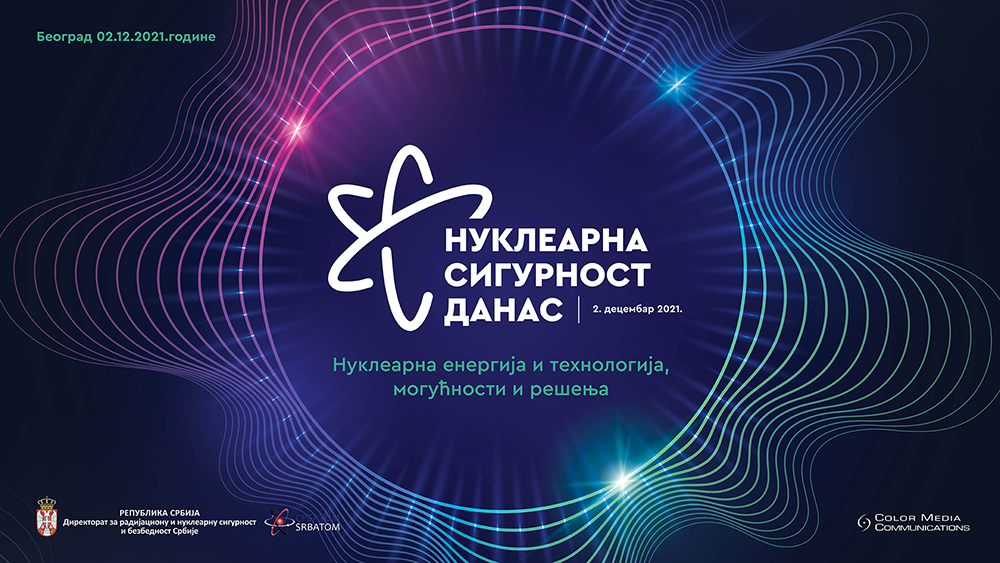 As part of his opening speech, SRBATOM Director, Sladjan Velinov stated that the Directorate, by means of its cooperation mechanisms with the European Commission and the International Atomic Energy Agency invests significant efforts to raise the level of emergency event response preparedness, and to increase its capacities in the early warning of a radiation or nuclear accident.

“This has been verified by our successful participation in the international exercise ConvEx-3 this year that tested the response to a simulated accident at a nuclear power plant (NPP) in the United Arab Emirates (UAE). The conclusions from this exercise showed that our country has adequate response measures if a similar accident happened anywhere in the world”, said Velinov.

The speakers at the first panel “Nuclear Energy – Today and Tomorrow” were Jan Haverkamp, a Senior Nuclear Energy and Energy Policy Expert with Greenpeace Netherlands and the World Information Service on Energy (WISE) and Co-Founder and Vice-president of Nuclear Transparency Watch, Dr Jonathan Cobb, a Senior Communication Manager at the World Nuclear Association, and Dr Michel Berthelemy, a Nuclear Energy Analyst at the OECD Nuclear Energy Agency.

During his presentation, Jan Haverkamp stated that nuclear energy is the industry on the decline. He also said that there are currently 105 nuclear reactors in the EU, and 114 outside Europe, of which 57 will probably be shut down in the forthcoming decades. Currently there are four reactors in the EU and three outside Europe that are under construction. This means that in the next ten years, European nuclear grid will be reduced by more than 25%. He assumes that around five reactors might still be operative in 2050, which makes nuclear energy the industry facing serious problems.

He added that Serbia should focus in the future on higher level of energy efficiency, vast renewable potential and shift to sustainable industry practise in the field of agriculture and mobility, rather than nuclear energy.

Dr Jonathan Cobb, a Senior Communication Manager at the World Nuclear Association, explained that his vision of the future is the one in which we build on the proven capabilities of nuclear energy as a key technology and an instance taken from a broad suite of clean, low-carbon technologies, not just for electricity production, but for achieving net-zero emissions across the entire range of human activities as well.

“While current reactors have an important role to play, new reactors will be needed to replace fossil fuels and meet future electricity demand growth. This means that, in order to efficiently respond to the issues of climate change, the construction rate must increase in the future”, said Jonathan Cobb.

Dr Michel Berthelemy, a Nuclear Energy Analyst at the OECD Nuclear Energy Agency, said that there is an increasingly wider room for nuclear energy to contribute to Paris Agreement objectives.

He added his expectations that the nuclear energy would treble by 2050, and thus contribute to avoiding more than 87 gigatonnes of cumulative emissions by 2050, which is seen as a significant nuclear energy contribution.

The second panel at the conference was “The Role of Nuclear Technology in Environmental Protection” with Celina Horak and Marc Metian, the representatives of the International Atomic Energy Agency as the speakers. The speakers at the third and final panel “Nikola Tesla and X-Rays” were Branimir Jovanovic, Deputy Director at the Nikola Tesla Museum in Belgrade and Michael Pravica from the University of Nevada, while  Dr Jelena Jovanovic Simic, Senior Curator at the Museum of Science and Technology in Belgrade presented the exhibition “Development and Application of X-Ray Technology among Serbs – from Tesla and Pupin to Present Day”.

The conference is available on the following link.