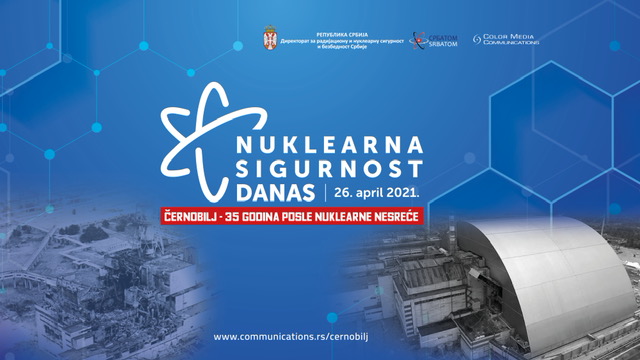 Belgrade, 26 April 2021 – Serbian Radiation and Nuclear Safety and Security Directorate (SRBATOM) organized online conference “Sustain Nuclear Safety: Chernobyl 35 Years After”, on 35 years since one of the greatest nuclear accidents in the history of humankind.

The accident on 26 April 1986 in unit 4 of Chernobyl nuclear power plant was ranked on the International Nuclear and Radiological Event Scale (INES) by the International Atomic Energy Agency as the highest, level 7 nuclear disaster.

At the opening of the conference, SRBATOM’s director, Sladjan Velinov underlined that Chernobyl stays as a reminder how nuclear energy must be used in a manner that ensures security of citizens and the environment. He also pointed out the fact that Chernobyl prompted the countries with nuclear power plants or those in the vicinity of nuclear power plants, to establish the systems of early notification of nuclear accidents that provide for the dose rate measurements of ionizing radiation in the air.

“SRBATOM already uses such a system that currently counts nine measuring stations evenly distributed throughout the territory of Serbia, and we are also making efforts to upgrade the existing system with the aim of providing for much denser coverage of our territory with detectors”, said Velinov.

The Ambassador of Ukraine to Serbia, H.E. Oleksandr Aleksandrovych stated that Chernobyl was both horrible and educative lesson for humanity that impels us to contemplate over the level of responsibility of the authorities towards people for the decisions they make.

“Chernobyl nuclear disaster resulted in irrevocable medical, economic, social and humanitarian consequences. In terms of ecological impact, this disaster escalated into a global catastrophe since 3/4 of European territory had been contaminated with radioactive caesium”. Aleksandrovych added that when it comes to human casualties, Ukraine takes the first place among all former Soviet republics.

Gordana Pantelic from Vinca Institute of Nuclear Sciences placed special attention on the fact that the material losses and the enormous cost of rehabilitating the consequences arising from Chernobyl accident remind us of how important is to strictly observe all international security requirements during the design, construction and operation of nuclear power plants, no matter the scope of the investments into security systems.

The Distance of Chernobyl, cope of accident and weather conditions had as a result the presence of the isotopes of iodine, caesium and strontium, as well as other radioactive elements in the environment in Serbia. Even today, 35 years after the accident, caesium can still be detected in our environment. However, its activity is exceedingly low and poses no threat for people and the environment, said Pantelic.

Maksym Shevchuk from the State Agency of Ukraine for Exclusion Zone Management underlined that, although the return of people to the exclusion zone will not be feasible, it is a sustainable location with highly technological facilities for safe and secure management of radioactive waste and spent nuclear fuel. The past decade activities on the construction and placement of a new sarcophagus to elevate the security of unit 4 served this purpose and allowed for further activities in the remediation of consequences, said Shevchuk. He particularly underlined the fact that a significant part of the exclusion zone is today a special protected zone where wildlife is not endangered by any human activities, and where abundant flora and fauna can flourish.

The conference “Sustain Nuclear Safety: Chernobyl 35 Years After” was also an opportunity to discuss the mitigation of accident consequences, decommission of the nuclear power plant, rehabilitation and remediation of its site, as well as the reactions to this nuclear accident both in Serbia and worldwide.

Considering its concept, this conference continues the main event of “Sustain Nuclear Safety”, organized by SRBATOM once a year. Such events serve to acquaint the citizens with the safe applications of radiation sources and nuclear energy.

You can see the entire conference on SRBATOM’s YouTube channel.