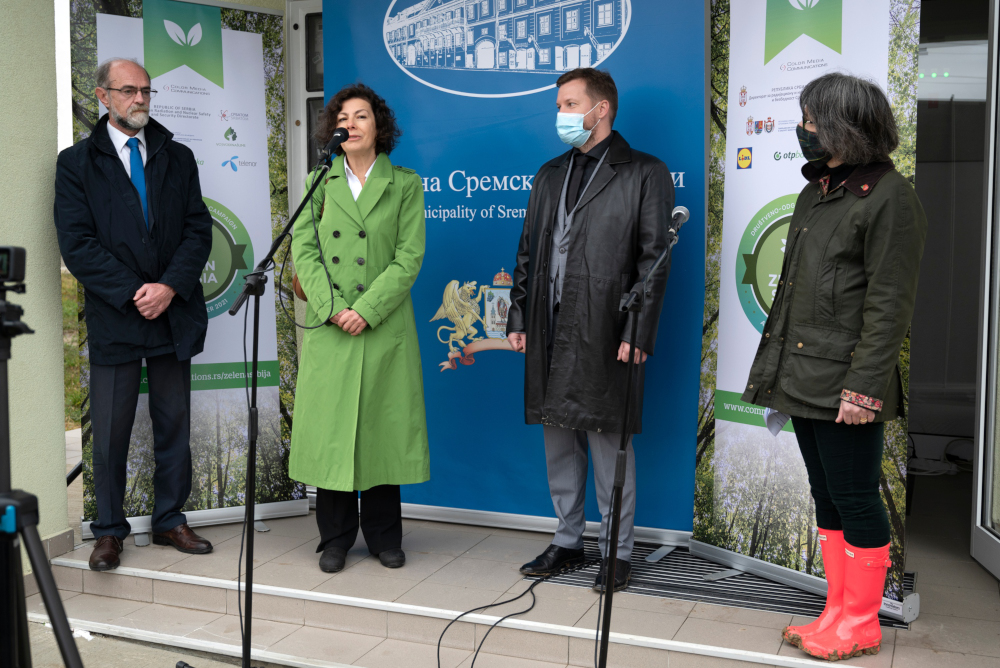 Serbian Radiation and Nuclear Safety and Security Directorate (SRBATOM), in cooperation with Color Media Communications, and with the support of the Provincial Secretariat for Urban Planning and Environmental Protection, continued the project of „Zelena Srbija“ in Sremski Karlovci by planting  20 high-quality linden seedlings. The partners of this year’s project are the Public Company of “Vojvodinašume”, OTP Bank, Lidl and Telenor.

Sremski Karlovci are the sixth out of ten planned cities and municipalities that recognized the importance of „Zelena Srbija“ project, and, thus, provided for the linden seedlings which were planted in Cerat residential area where the refugees and displaced persons from Croatia and Bosnia and Herzegovina have recently settled in.

SRBATOM’s Assistant Director, Mr Branko Brajic pointed out in his speech that, so far, the project of “Zelena Srbija” had been realized in 15 cities throughout Serbia, which resulted in a few hundred of various seedlings of new trees.

“I am truly honoured to see that the socially-responsible project of “Zelena Srbija” is today realized in a place of such spiritual and historic value as Sremski Karlovci. Landscaping, especially in urban areas, is of utmost importance not only for the quality of the air we inhale, but also for the refinement of our surroundings. This residential area is a symbol of new beginnings for many families, and we hope that this modest gesture of planting linden trees is contributing to a more beautiful environment and healthier lives for you and your closest ones.”

The mayor of Sremski Karlovci, Mr Aleksandar Sasa Stojkecic also pointed out how honoured he felt to be a participant in the project of “Zelena Srbija”.

“We are standing today in the territory of the National Park of Fruska Gora and the Special Reserve of Nature Koviljsko-Petrovaradin Rit and feel nothing but pleasure that in this manner we can contribute to raising ecological awareness and spreading the idea of planting new trees as our way forward. Today, we are also setting the example to the others and point at the ways to contribute to the preservation of the environment and better quality of our lives, and thus, motivate them to do the same.“

The project of ”Zelena Srbija“ is realized through the cooperation with a number of Embassies in Serbia. Today, in Sremski Karlovci, this support came from the Embassy of Great Britain.

The Ambassador of Great Britain to Serbia, H.E. Sian Macleod reflected on the recent UN Climate Change Conference in Glasgow where 130 countries, one of which was Serbia, participated. She pointed at the importance of trees for the benefit of humankind, and underlined the reasons why this is one of our strongest weapons in combating climate changes.

“The environmental protection, decarbonisation and green energy are among the top priorities on Serbian political agenda, and this is something I have to give my strongest support to. I hope that Serbia, as the country that respects the natural beauties, will join the states that have already signed the Declaration on Forests and Land Use. I also expect that we will jointly build the future more resistant with every new tree we plant“, said Macleod.

The Senior Officer for Cultivation and Forest Protection at PC “Vojvodinasume”, Ms Sladjana Dabic, stressed that new linden trees would definitely play an important part in better quality of air and the health of people that had settled in this area.

“I am glad that the choice fell on linden trees as they spread very pleasant odours in the early summer. I hope this project will also serve as a motivation to other people to join us in this noble act”, said Dabic.

Serbian Radiation and Nuclear Safety and Security Directorate as the institutional patron of “Zelena Srbija” project, in cooperation with the remaining partners, has realized the campaign of planting new trees so far in 2021 in Zrenjanin, Backa Palanka, Priboj, Topola and Kikinda. Besides Sremski Karlovci, there are another four cities where the project will take place, all with the aim of raising the awareness of citizens, local self-governments and companies on the importance of landscaping Serbia and protecting the environment in general.